So you’ve gone to all the trouble of building a multi language website, now you need to start brining people to your funky new site.

Social media, as we know, is a great way to get your message out there.  In this post I want to talk about how you can create a multi language social media presence.

I’m not going to go into the mechanics of social media marketing, that’s far beyond the scope of this post, but I will talk about how you can segment your social media efforts over different languages.

There are two main ways you can approach multi language social media, they are multiple accounts or single account multiple languages.

The first approach is to have multiple social media accounts, one per language you support.

The way I like to code up social media widgets to point to a specific URL is to use a great plugin called widget logic https://wordpress.org/plugins/widget-logic/.  So I will build the site using WordPress, install WPML the multi language plugin then setup a series of social media widgets and control which one is shown dependant upon the language code that is set.

With WPML when a language is selected, a constant called ICL_LANGUAGE_CODE is set, we can test this with widget logic to decide if a widget should be shown. 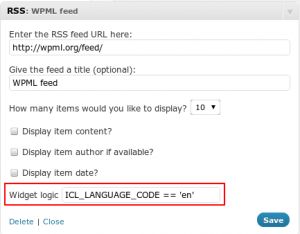 Pros And Cons Of Multiple Accounts

The benefits of multiple accounts is they are dedicated to one language.  People will be more likely to share your content if it is in the languages your followers and their peers use

The downside of this approach is you are diluting your social media efforts, the reach of a tweet for example doesn’t go as far if you only have 100 followers in Italian.

The second is to have a single social media account and to have multi lingual staff look after that account.  This could be a single polyglot or it could be a team of people looking after updates for a particular language.

If your multi language work is for a particular geographic area, perhaps you could schedule updates to happen at a particular time.  If you support Japanese and all your tweets go out during European working times, you are defeating the point a multi language social media.

You may need multiple people to have access to one account which can cause scheduling issues and update confusion.

People may be turned off by updates in a language they do not understand, and you could see follower loss as a result.

On the plus side there is a single account with a much larger reach to  your message gets out there more easily.

On most social media accounts,  you can setup a landing page where people go to, to learn more about your “thing” make sure you have these in multiple languages, and if you go the multiple account route, link to a landing page in their language.

Need help setting up multi language social media?  Get a no obligation quote.